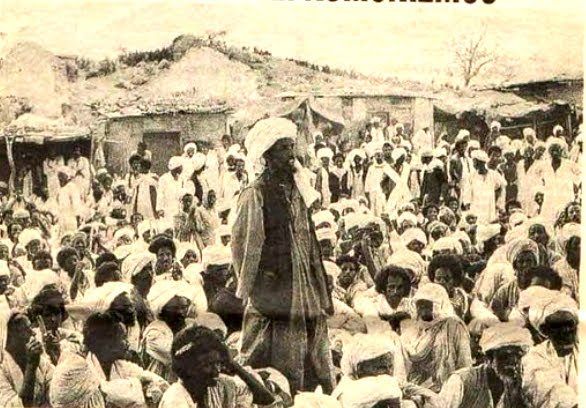 This is what the people of Western Europe will soon be.
(LM: The image and the caption were included in the 30-year-old article.)

[Introduction in the box.] Ibrahim Husseini, leader of the Provençal Allah's Front, becomes president of France and proclaims an Islamic republic in Paris. German Chancellor Türgüt Mustafa is alarmed by attacks by the Shiite majority in Bavaria against the Catholic minority, which demands the reintroduction of German at least in primary schools. British Prime Minister Jalal Jrinaputra faces separatism from Buddhists who set fire to a Hindu temple in Liverpool. Jorge Luis de las Mercedes Pérez y Dominguez, governor of independent California, introduces Spanish as the only official language in the state. So do the presidents of the other independent Hispanic states – Arizona, New Mexico, Texas and Florida. The year is 2023...

No, this is not science fiction, this is a vision of the very near future that our generation will see for itself. Three and a half years after the fall of communism, extremely interesting global trends are emerging in which we will play our part. The pendulum of history is swinging sharply back the other way. Over the last 200 years, Western Europe has colonised the whole of the Americas, Australia, Africa and Asia. Now the former colonies are returning to their mother countries in a cruel way. Today's best-known English writers come from India and Pakistan, Spanish literature is not produced in Spain but in Latin America, the athletes in US colours are all black – descendants of imported slaves. There will soon be more Muslim mosques than churches in Paris. And it is not just about culture.

The population explosion in the Third World is unstoppable. For example, unassuming Indonesia alone has a population of 200 million, or almost as many as the US, and will overtake them in ten years. Turkey had only 16 million inhabitants in 1950, has 60 million today and will be 80 million in ten years. Latin America today is teeming with 500 million people, not to mention China and India, which together account for almost half of humanity. Yet the biggest increases are in famine-, war- and AIDS-ridden Africa. Scientists have calculated that if a daily bomb fell on Africa killing 90,000 people, it still wouldn't stop population growth. In fact, 250,000 more Africans will be born on the same day. And they are all heading for the rich countries of Western Europe and the US, where they are fleeing poverty in their millions. Do you know what will happen in just ten years?

The south of the USA will be flooded with tens and then hundreds of millions of Mexicans and other Latinos who will comprehensively Hispanise the southern states and gradually take the administration into their own hands. They will exert a strong separatist pressure. Western Europe will be displaced by millions and millions of North African Arabs, Turks, Nigerians and Indians. The wealth of these countries will dissolve in a monstrous sea of immigrants. They will not prevent the influx – their own liberal ideology of free movement of people and human rights will betray them. The situation is suspiciously reminiscent of the last days of the prosperous Roman Empire before its conquest by the barbarians. The first (rich) world merges with the third (developing) world.

Only the second (post-communist) world – i.e. us – will be left behind. The immigrants don't care about us, we are almost as poor as they are. Yet we are the inheritors of European culture and education. Paradoxically, Eastern Europe saves itself from infiltration precisely because of its ruined economy. It will be an island of stability, while in Western Europe Muslim states will emerge in the midst of chaos. The pendulum of history will swing back and the Slavs will emerge from the shadows. The fatal virus of immigration will be survived only by those countries that have experienced communism. An interesting future awaits us.

P.S. If you don't believe it, put this article down and read it again in ten years. (LM: This P.S. was a part of the article! OK, we ignored the text for 30 years, not just 10 years.)
Translated with www.DeepL.com/Translator (free version)