Glen Kamara, the black "international Finnish" player of Rangers, a Scottish soccer team, became the most hated athlete in Czechia after his violent behavior on the stadium (against SK Slavia Prague), after he beat Czech player Ondřej Kúdela in a dark Glasgow tunnel, and after his rather demonstrably fabricated accusations of Kúdela from racism that were created to mask his own (real) unacceptable behavior.

Video and audio with a local perspective on the atmosphere is here. It was chosen to demonstrate the kids' selective negative emotions to Kamara. You will be the judge whether anything inappropriate has taken place.

Like United and City in Manchester, Slavia Prague and Sparta Prague have been the two traditional rivals in the Czech capital for a century. It just happens that in the current table of the main Czech league, the second Slavia and third Sparta are bettered by FC Viktoria Pilsen (my hometown), despite some 5 years of lousy performance of the Pilsner team that had suddenly become the main star of the Czech soccer in 2010. (Robert Platek, a rich dude in New York, considers buying our club.) Pilsen has surely added complications to the traditional binary rivalry of the Prague teams.

At any rate, AC Sparta Prague played Rangers yesterday. Because of some previous harassment of the Prague team, normal adults couldn't be present in the stands. However, some UEFA exception allowed organized children (with a small number of guards) to attend. Prague has fully exploited the exception. So 10,879 Czech children (age: 6-14) were rooting for their beloved Prague team. An example of the wonderful atmosphere is sketched in the video at the top. The Slovak player Dávid Hancko scored the only goal (Prague won 1-to-0: Scotland gets battered everywhere they go) and he praised the great energy coming from these children, as so many others. Some critics of Sparta's ultras have pointed out that the ultras should be ashamed if so many people say that they have experienced the atmosphere (made by children) like never before on that stadium.

It is absolutely unsurprising that there were lots of kids who were booing when (or whenever) Glen Kamara touched the ball. He is a notorious person and this is what happens to such persons. (Sparta used to equally loudly boo the totally Aryan legendary Pilsner player Limberský who is blonde and recently retired.) His behavior on the grass was atrocious again and he ultimately received a red card (two red cards in two matches is a lot). There's no doubt that he deserved the red card: his elbow was in an opposing player's face, end of discussion. Fine, instead of thinking for the wonderful atmosphere, the far left and simply racist British press started another wave of their pathetic, hateful anti-Czech diatribes. Surely the kids had to be racists because they were booing Kamara and the reason had to be that he was black. Wouldn't you consider the possibility that he was booed because he is a terrible human being? A white Rangers player got a similar treatment but they don't care about him.

Check a gallery with 32 pix at The Flash, a tabloid.

Things kept on escalating due to some expected and some new anti-Czech warriors. Kamara's lawyer who openly brags about his affiliation with Burn-Loot-Murder (because it's a positive thing in the U.K. mainstream now!) has been attacking the pure Czech children's souls on his Twitter cesspool relentlessly. But he sort of became a second league in his industry of bigotry because he didn't include a powerful image. So I believe that the following tweet was a more influential explosive that has escalated the disagreement to the diplomatic level.

The worst thing about the scenes in Prague last night is that I’m not shocked in the slightest!
In no way is this the fault of the CHILDREN because they’re behaving in a way they see adults do/encourage. What chance do they have when placed in a bowl with rotten fruit.
UEFA 👎🏾 pic.twitter.com/HL83FNv9EE


OK, the children (who are highlighted, see the capitalization) are labeled as mouldy strawberries (that have caught the mold from their older counterparts). It is so friendly! This Marvin is an assistant player, whatever it means, and the "equality and diversity adviser for the Scottish FA" (the existence of this position has made many Czechs [who don't follow the Anglo-Saxon world much] gasp for breath). You can't make the šit up. It is these equality-and-diversity "officials" who are actually the main engines powering the bigotry revolving around someone's nationality and/or subracial status. If you eliminated these people with "diversity" and "equality" in their Twitter description from the polite societies (I leave it to you to invent a morally and legally impeccable way to liberate the world from such individuals), over 99% of racism and hatred between groups would disappear.

Although I think that even such incredible, ideologically motivated attacks on self-evidently innocent children may be normal in the U.K., they are still considered absolutely insane in Czechia and most of us won't change our mind anytime soon. So the mouldy strawberries helped to elevate the reactions to a higher level. Sparta Prague published an official statement, Stop Abusing Our Children (Slavia has officially endorsed Sparta). The statement (available in Czech and English, see the bottom) has praised the kids (and the atmosphere they created) as well as the organization which managed to do much more than the minimal duties. And Sparta pointed out that it is shockingly impolite to abuse the children on the Internet. The people are cowards. Kamara's lawyer was discussed separately. In Czechia, they say, such an attorney would already be discussed by the Bar Association. Sparta expects a similar body to go after this rogue lawyer's neck in Scotland. But that may be too optimistic, I add: are there any adults left in the rooms of the U.K.? 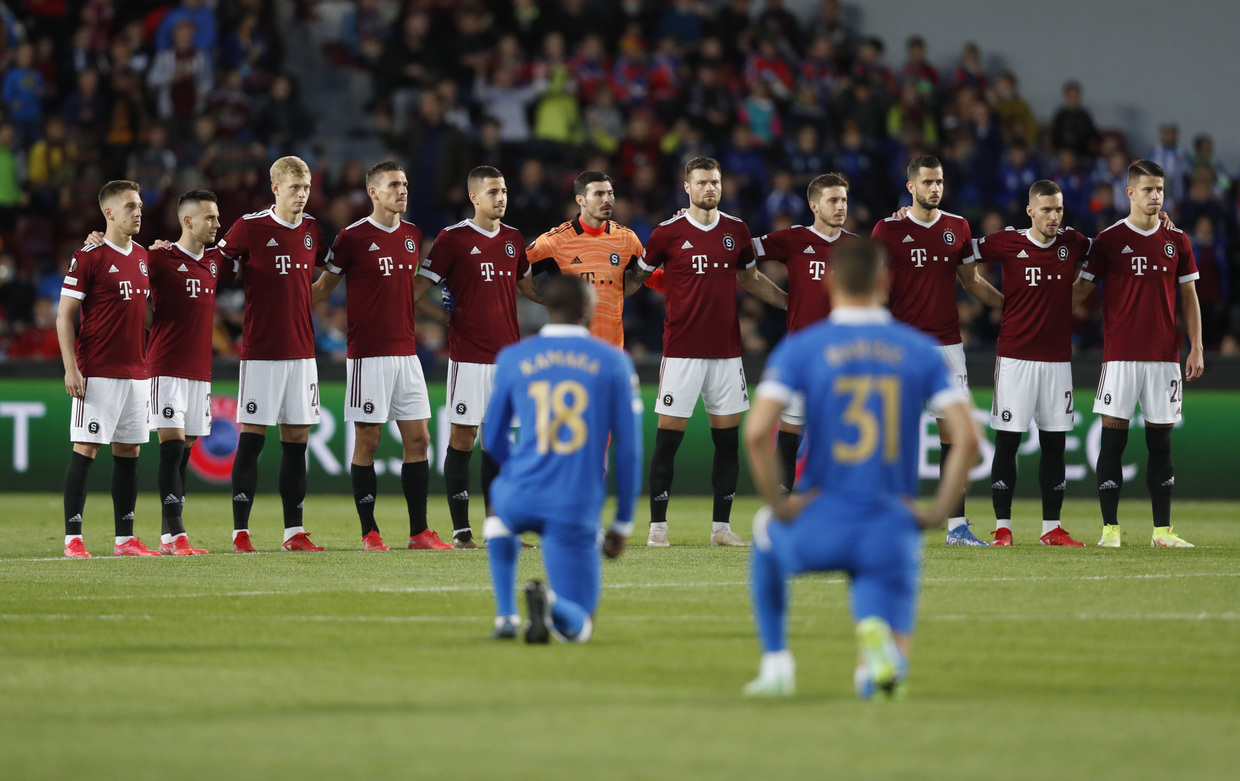 These scenes have become normal. One team celebrates the friendship and fairness, the other team performs disgusting racist rituals of submission to a privileged race. That ritual should be banned on Czech stadiums much like "Hail Hitler", the latter is actually less explicitly racist.

The anger didn't stay confined to the clubs. Perhaps because elections are in 7 days and his party moves close to the 5% threshold, the Czech minister of interior and the leader of the politically correct Social Democratic Party, Mr Jan Hamáček, voiced his disgust about the rotten fruits. He informed his Twitter followers that he had ordered Jakub Kulhánek, the minister of foreign affairs (who is also a social democrat), to act. Kulhánek has voiced his own dissatisfaction and informed everyone that the British ambassador will be summoned on Monday and Czechia will demand these anti-Czech attacks to stop (a newspaper story).

Other people in Czechia have also called the attacks on the children unacceptable, including Petr Fousek, the president of FAČR (the Czech soccer association), who was on the stadium during the match and witnessed the great atmosphere.

Maybe you are an "adaptive" person who isn't doing these things but who is OK with this kind of terror – anti-white and especially anti-Czech terror. We are not fine with it and if the culprits fail to stop it, the situation will escalate and I think that we will be looking for more powerful allies to deal with the problem that exists (not only) in the British Islands, using more powerful tools than diplomatic rugs. You may want to think twice (and morally contemplate) which side you should support. 94% of readers of iDNES.cz, Czechia's most visited news server on the Internet, agree that it is appropriate to elevate this row to the diplomatic level.