I won't translate the text because it's been based on English sources such as The Daily Mail (mostly about St Andrews, the oldest university in Scotland) and The Times (mostly about the University of Kent, just East of London). 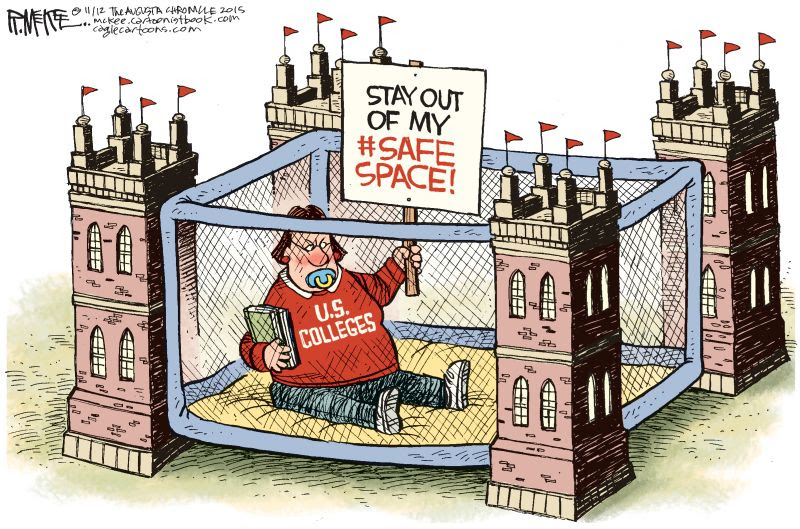 The new academic year started and their new freshmen are subjected to an unprecedented lobotomy. They must memorize and "correctly" answer tons of questions about equality, diversity, discrimination, sustainability, carbon guilt, other guilts, and even the role of second hand clothes in discrimination (a person's second-hand clothes means that he belongs to the "underprivileged" i.e. privileged groups and you must worship him – or on the contrary, I can't care about this particular stupidity).

These questions must be answered before any student is allowed to study at the university. Students must check "correct" or "incorrect" in a way that the masterminds of this program decided to be (politically) "correct"; when they have an insufficient fraction of "correct" answers, they must try again. These rituals are often called the "diversity modules" of the courses and similar fancy names. This machinery clearly means that in 2024 or so, these universities won't have a single alumnus who is both intelligent and ethical.

The details of the brainwashing are shocking, too. For example, there is a question "what is equality" that the student has to answer. Well, "equality" clearly means the same fundamental thing but the appropriate definition would be adapted according to the context, I would emphasize. In this context, they probably mean "equality as a value that some politicians want to achieve" (but they are always sloppy about everything, like people with a totally muddy thinking, so none of the questions are even carefully formulated – they are exercises of the form "you hear a slogan, you need to respond with the matching slogan", a game optimized for the IQ-50 humans).

So of course, you would correctly answer "it is the situation in which everyone is treated the same". Your answer would be labeled "incorrect". Instead, your classmates who would answer "equality is when people are treated unequally to achieve progressive, equal outcomes" would pass (I have polished their awkwardly formulated answer because the author of that official answer was clearly a moron but my polishing could have already rendered the answer "incorrect", too). In plain English, "equality" means to terrorize men, whites, straight people, intelligent people, and members of all groups that have been considered achievers. You have to parrot these disgusting, idiotic, outrageous lies before you earn a degree in Kent now!

In another situation, the student has to "admit personal guilt" because it is a "useful start to overcome unconscious bias". Wow. This is a Christian addition to their Marxism-Leninism brainwashing. (Some Czech readers have compared this neo-Marxist brainwashing to the "education" led by the Taliban: the differences are modest by now, too, and the hypothesis that the white nations aren't full of morons at the mental level of the obedient Afghani savages has been falsified, too.) I could go on and on and on. The kids have to parrot unbelievable lies about the global warming pseudoscience and dozens of other topics.

Over 300+ user comments speak a clear language. This development shows the ongoing collapse of the Western civilization; they indicate that Orwell's novel, originally a piece of science-fiction, has been turned into an instruction manual. These courses are similar to the notorious "Marxism-Leninism" courses at Czechoslovak universities of the communist era. But I think that a majority of the Czech readers largely agrees that what they are starting in the U.K. is actually worse or much worse than the "Marxist-Leninist" indoctrination that we used to have during communism.

One reason is that virtually no people took the Marxist-Leninist junk seriously. I must add that this had very good reasons. Marxism-Leninism was a movement that picked the working class as its preferred group. Marx himself was a drunk low-class moron, too (while Engels was a fancy parrot from the classes of spoiled brats who inherit factories). Almost everyone who got "naturally" to the universities understood very intimately that he or she belonged to a different class (the "working" intelligentsia, as it had to be called) which is naturally expected to possess superior intellectual skills. So everyone knew that this was something that a lower class wanted to impose on a higher one. Marxism-Leninism was a bunch of crackpottery that milling machine operators considered their high brow science (or their intellectual guru's high brow science) and intelligent people could have paid lip service to that nonsense to express their gratitude for the production of the milling machine. In the 1950s, they had to if they wanted to preserve decent lives.

But this repetition of the radical leftist indoctrination is different because it didn't start from the working class. It started from some people who consider themselves intellectuals – even though they are a part of the intellectuals who are dumb as a doorknob, at least when it comes to the most elementary questions "how society works". Because of the conflation of the Academia and the neo-Marxist imbeciles (two absolutely different groups that, sadly, even most of the people considering themselves right-wingers seem incapable of distinguishing), they may rather effectively pretend that this utter garbage belongs to universities.

Needless to say, you do find critics, even tons of students, who are terrified by this indoctrination. Even the format of this "learning" contradicts everything that the universities should represent (and represented for almost 1,000 years). Unlike kindergartens etc., they should build on the pre-existing independent thinking of the students and expand that kind of thinking. Instead, what they are introducing is pure coercion, an exercise in mindless obedience to unhinged, lying jerks and their awkwardly formulated lies. It's just wrong. How do these "universities" (where the quotation marks have obviously become absolutely crucial by now) respond?

They respond by saying that it is the mainly students' union that demanded this garbage to be introduced. So the "universities" are just serving their students! Right except that this behavior is absolutely insane. The demands were made by organized extreme leftist groups that are composed of intellectually defective sick animals that don't possess enough mental power to complete the high school, let alone the universities. They are just some external political organizations. A true university just cannot possibly become a mindless servant of "fashionable" external political groups, especially not these radical groups that are detached even from the most trivial wisdoms about the world. A true university has its own universal rules that have been around (and that have been slowly evolving) for centuries and you just can't totally change them without destroying the whole structure.

I mentioned that the "genuine belief" of some students towards this utter garbage was one difference from the communist-era indoctrination. You were promised another difference that is often discussed by the Czech commenters. The other difference, also showing that this is much worse than communism, is the work or lifestyle of the preferred classes. In communism, the preferred class were the workers who were simple and lacked many things to produce a healthy development of the society in all the fields that are important. But the workers themselves were still one of the useful, important groups in the society!

It's different now because the preferred groups that the "students" at the "universities" have to worship are overwhelmingly useless, arrogant parasites. They are not "workers" in the sense that you could reliably expect them to work or to create something useful for their compatriots. Instead, they are immigrants that expect advantages for being immigrants or for having a darker skin color, they are people with messed up sexual orientation and other disorders related to their personal health, and similar things. This makes a difference. The worshiping of the working class encouraged by the Marxist-Leninist indoctrination led to "more work". For example, we were producing an increasing amount (and, at some moment, an excess) of steel and coal. The worshiping of the new preferred classes (minorities) will unavoidably encourage the things that are symbolized by these classes – arrogance, parasitism, laziness, bad health, lies, and especially the universal decay of the society composed of acts that clearly hurt the whole.

The pace at which these Western nations are decomposing in front of our very eyes is incredible. It is obviously a much faster process than the decay of communism. Karel Dyba, a co-mastermind of the Czechoslovak economic reforms after the 1989 Velvet Revolution, recently sent me an essay about the details of the collapse of the Soviet Union. It was a complex, insightful reading about various imbalances that were emerging in their non-market economy and various centralized tricks to deal with these imbalances, often by creating even more serious imbalances elsewhere. Many of the events that led to the dissolution of the Soviet Union were predetermined a long time before they occurred because various "solutions" to the imbalances made the regime more independent on the West, less capable of doing X or Y (which used to help in earlier stages of communism), and other things. The system simply had to collapse because the lack of freedom unavoidably leads to the inflation of increasingly macroscopic imbalances.

But the Soviet leaders were still basically realizing the basic facts (such as the fact that some problems are probably appearing somewhere); and they had the desire to prevent some truly catastrophic evolution. This is not the case in the U.K. today which is on a catastrophic, suicidal trajectory and their leaders seem to be dancing and completely denying any existential risks. You can see it in the escalating energy problems and the skyrocketing energy prices which I predicted a long time ago.

The U.K. (which already has Soviet-style empty shelves in many shops) is already running out of petrol in most petrol stations, drivers including Nigel Farage fight for fuel in the remaining minority. But their government still continues its utterly suicidal green, anti-CO2 policies justified by an atrocious pseudoscience produced by "giant minds" such as Gr@ta Thunberg's. It is just absolutely insane. I think that they are not ready to admit the basic reality (and the fact that they have been catastrophically wrong about this basic reality), not even moments before the absolute collapse.

So I think that China – and maybe another country (I increasingly think that even Czechia might possess what is needed) – will take over the British Islands rather soon and the nation will cease to exist. It will be a much deeper collapse than that of the Soviet Union. Scots may be turned into some extra Chinese cattle (we use the same word for cattle and a Scot in our language, anyway). I have surely had a positive emotional relationship to the U.K. but it's gone. When a nation loses the plot this completely (and the extent of this insanity is really impossible to understand or believe for me), it simply deserves to die and will die. The territory must be reused by a more viable nation.