Slovakia has its own Watergate

Robert Fico (picture below) is arguably the main leader of the current Slovak opposition and a former prime minister of Slovakia (party: Smer/Direction Social Democracy, estimated to be 2nd strongest in Slovakia now and get ~18% in future elections).

I was never "thrilled" by him, after all, his party is a (moderate) left-wing one, and (much like Babiš), he had some ambiguous relationship towards the fall of communism in Czechoslovakia. However, he always looked like a chap with common sense, I don't remember anything "terrifying" from his reign, and despite their different backgrounds, he might be comparable to Babiš in my optics. 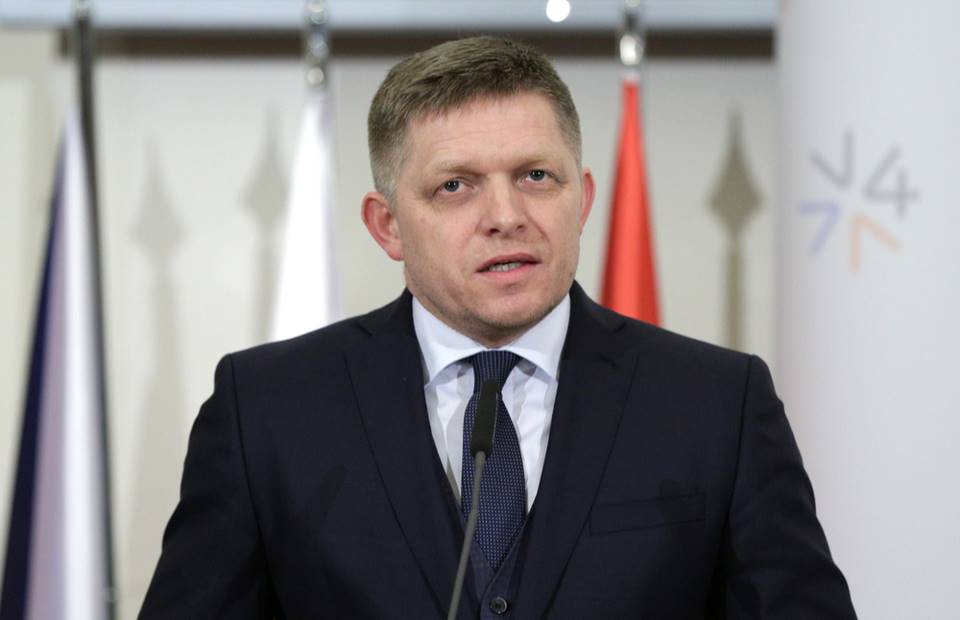 The current Slovak government is doing lots of bad things. Like many other governments, it has imposed rather draconian restrictions on civil rights that are being justified by Fauci's virus. But there is another frequent theme. The Slovak government has launched a full-blown war against the alleged "Mafia" which is supposed to include many politicians, investigators, police bosses, and judges from the Fico era and business people who are considered their friends – and, at least as written in between the lines, Fico himself.

I have no idea whether these people and/or Fico himself have done some serious crimes. It's possible. But I've been served this "affair" hundreds of times in the recent year or years and I just couldn't see any beef whatsoever. I believe that this fact is at least circumstantial evidence that the beef doesn't actually exist. Everyone is constantly "accused" of something, we constantly hear and read lots of emotional negative words about the whole Fico environment, but you are never told what the crime (or at least the sin) was supposed to be. So while I don't have a complete proof, it has increasingly looked like a huge witch hunt which has led to the arrest of many people who look innocent to me.

Last night and today, it seems that this witch hunt has jumped the shark and my subjective confidence that all these accusations are completely illegitimate and the arrests are illegal has approximately tripled. What happened? Fico finally became a target. The police has recorded his conversation with some entrepreneur (named Bödör) or his father and with the attorney for one of the people who have been accused of some wrongdoing. Clearly, Fico tried to transfer some wisdom to some people who are his friends or their friends and relatives – and whom he considers innocent, and he might very well be right. An innocent citizen surely has the right to advise to attorneys for some of his friends or their friends etc. who have only been accused so far; and he has no duty to publicize such meetings. The police has recorded the conversation after it got a permission from the courts. Where did the conversation take place?

It is clearly illegal for the police to intervene into the privacy of an innocent (at least so far) citizen, let alone the leader of the opposition party. They know this much so they created a story. The hunting cabin was bugged because... the police suspected that there were some poachers inside. They expected some illegal guys with the deer inside and instead, they accidentally caught Fico!

Is it possible? Academically speaking, it is possible. Is it likely? It is extremely, extremely unlikely. I think that you must mentally be a retarded child to easily buy this story. (I think that the people who don't care about this behavior of the police know that the poacher story is BS but they just actively want Fico to be illegally harassed.) Why would poachers be confused with a former prime minister in this way? And even if the suspicion of poachers in that hunting cabin were justified, the bugging would still be illegal. Once they saw that the men inside didn't deal with the deer or other animals, the recording should have stopped! It didn't.

It is almost certain that someone in the current Slovak government, police, and/or courts just wanted to obtain something that could be used as compromising materials against Fico, and obtain them at any cost and without any valid justification. On top of the illegal bugging, the recorded material abruptly (in 4 hours) got from the investigator to the media which just can't be legal, either.

I have listened to most of the fresh 33-minute-long press conference of Fico and other leaders of the Direction Party. Somewhere in the middle, they mocked the explanation involving "poachers" but they also made many serious statements that I completely agree with. It seems unprecedented in the civilized Western world – at least from the 1972-1974 Watergate affair in the U.S. – that the government has bugged the room where the leader of the opposition negotiated with someone. Note that Richard Nixon, a Republican president, almost certainly co-supervised the bugging of the Democrats' headquarters and after some years of accusations and denials, Nixon resigned.

Fico rightfully says that it is absolutely ludicrous for the Slovak government to dismissively talk about Lukashenko's treatment of the opposition because the current Slovak government seems to be doing at least comparable things to some of the Belorusian acts that we (with a refined enough definition of "we", the details who are "we" may matter) find unacceptable.

You may guess that the political atmosphere in Slovakia is tense enough so that Fico finds himself in some other conflicts. He accused the libertarian minister Richard Sulík of counterfeiting his final high school "matura" diploma; and conjectured that Sulík's party has close relationships with cocaine. Sulík only sued him for the latter (the drugs). Also, a week ago, Fico's Covid app "eHranica" started to say that he was vaccinated despite Fico's strong anti-vaxx attitudes (he reasonably says that the vaccination mania is primarily a matter of plain dirty business). So it seems that some hackers, possibly linked with the government, did it. Someone had to know and fill his e-mail, telephone number, and other personal data. To say the least, this apparent fabrication of his vaccination status has harmed Fico's image because he looks like a moronic vaccinated sheep (and perhaps as a liar) to those who believe the app. Yes, Fico's attitude to Fauci's virus is vastly more sensible than the current Slovak government's approach, of course. Because Fico's vaxx data were altered, he conjectured that a big part of the Slovak Covid data may be fabricated, too.

At any rate, the bugging of the hunting cabin seems like a serious violation of the rule of law in Slovakia, as Fico says. In recent months or years, I noticed that the leader of the nationalist party Kotlebovci, Marian Kotleba, has been unquestionably harassed by the Slovak government, too. Similar efforts of the ruling politicians to solidify their power by bugging and targeted legal harassment of the opposition (and the people considered close to the opposition) and by encouraging coordinated (incoherent but 100 times repeated) character assassinations in the media seems unacceptable to me. I don't remember Fico (or any other Czech and Slovak politicians after 1989) who did things at this caliber. It's also extremely concerning that a significant portion of the Slovak citizens are apparently OK with these fascist methods. It's also troubling that the media (like SME, Denník N, and Aktuality) that seem to lead the media part of the witch hunt seem to be Soros-affiliated media, like in so many similar cases.