Where the policy of decarbonising the economy is taking us

Somewhat hysterical fears about the contribution of human activity to global warming have dominated the Western elite for several decades, but only relatively recently have the dismantling of coal-fired power plants and the ban on internal combustion engines planned for 2030-35 come into play.

Even the current energy crisis will not immediately defeat the ideological consensus; people are conformist, parties and governments do not like to admit error, yet the threat of recession has already unnerved many economists and commentators, especially anonymous ones.

Few today would subscribe to the recent statement by the famous American economist Jeffrey Sachs: "With the brisk progress of zero-carbon energy technologies and sustainable agriculture, the world can end greenhouse gas emissions by mid-century at low cost."

We now know that the total, often disguised, cost of renewable energy is prohibitive, the zero carbon ideal mere wishful thinking. Only the brave will say it fully; Western democracy no longer professes freedom of speech, and careers depend on agreement with the ruling ideology as they did under the communists.

How could it be that fossil fuel prices, with such huge (known) world reserves – oil enought for 200 years, coal and gas enough for at least 1000 years (International Energy Agency) – have suddenly risen so rapidly and the world is facing an economic crisis?

The first thing that springs to mind is the inflated volume of cheap money that governments are pumping into the economy for dear life and the post-Covid demand. The broken global supply chains are responding badly, not to mention the shortage of people in transport and elsewhere who have found better jobs during the pandemic. After the winter season, things will calm down a bit and fuel will get a bit cheaper. But the bottom line will not change; the fossil fuel extraction and industry has been vilified for at least a decade. Many investors have left because of bad conscience, others want to make as much money as they can before immoral extraction is banned by governments altogether. An industry that used to spend two-thirds of its annual profits on maintenance and investment is not going to invest without a secure future. The international oil cartel OPEC + Russia have refused to increase production (October 4) and this time US producers are also waiting. Annual investment by oil producers has fallen from $750 billion since 2014 to an estimated $350 billion by the end of this year (Trafigura) and half of the major projects have been abandoned by entrepreneurs.

The decline in investment will inevitably drive the fossil fuel-dependent world into recession. In vain do the greens rejoice that this will give a relative boost to the price of renewable energy, which, too, with demand artificially driven up by the scarcity of precious metals and copper for windmill masts, is soaring, as are battery prices. By the end of September, the average price of electricity in Europe had risen by 40 per cent. 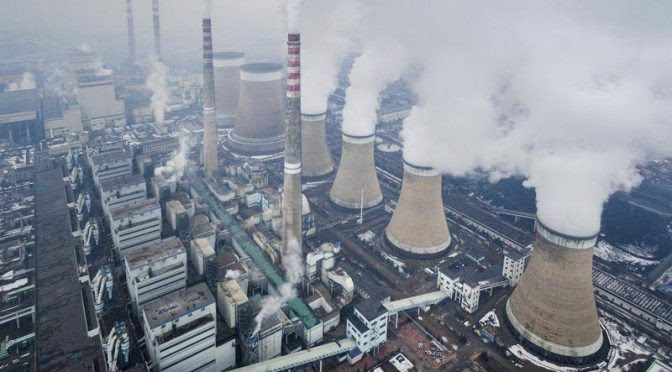 A paradoxical consequence of the crisis unleashed by Western policies is the situation in China, which is opening one coal-fired power plant after another due to the rising cost of fuel and is estimated to build twice as many (120) next year. It is not worried about global warming and will not let its heavy industry be destroyed. It is strange that the zero-emission advocates do not criticise the Chinese dictator.

The ideology of total decarbonisation of the world is totally unrealistic, it is the science fiction of a sick mind, even the Western advanced economy is not capable of completely replacing fossil fuels at today's technical level, unless – and this is an incomprehensible question – we return to building nuclear power stations, which ideological unreason forbids.