Like most nations, Czechs are exposed to quite some amount of stupid and dishonest pro-vaxx commercials everywhere.

Billboards often promote vacations along with the vaccine, urging you to "make a period after [terminate] Covid" along with the whole nation (this "period" has been promised from Spring 2021 and it was a lie everywhere, wasn't it? A similarly heavily leaky vaccine can never change the course of an epidemic qualitatively!). The prime minister offered his stinky tennis shoes to someone who would agree to be vaccinated.

I am always trying to turn off radios when I hear one one of the pieces (which simply insult me and drive me up the wall by their stupidity, every time) but it hasn't prevented me from hearing some of them 30 times. Two examples:

Boy: Mom, we will travel to the sea for the long weekend again, won't we?
Mother: Well, I am not sure this time...
Boy: But we have been going every year.
Mother: But the water is too salty there and it has annoying waves on it.
Boy: Isn't the reason that we are not vaccinated?
Mother: Not at all (silently, emphasizing the untruth), and we need to take care of the neighbor's hamster, anyway!
Boy: Mom? Natalia: I will have a huge graduation party, isn't it great?
Amalia: Well, parties are no longer fashionable, why won't we just be together, two of us.
Natalia: Have you lost your mind? There will be a PARTY! You must be afraid because you're not vaccinated right?

And similar stuff. I included these two because they're the most frequent ones on the radio; and because they have some sense of humor. (Hamsters are more intelligent than the professors in other ads who say things like "the only bad vaccine is a vaccine that isn't emptied to someone's ass or a shoulder". Oh, really? Wouldn't you agree, Professor, that a similar judgement is really, really simple-minded?) They are complete lies, designed to intimidate, too. Of course, inside families and among friends, the anti-vaxx people flood their counterparties with lots of evidence:

Boy, Natalia: Shall we go to the sea or the party?
Mom, Amalia: We can't because the giant Covid assholes in the government have banned XYZ for the unvaccinated. We can't get vaccinated because 1) that would mean our support for this loss of freedom in our country, 2) it is dangerous for our cohorts to get vaccinated because of... myocarditis... dangerous interactions of natural antibodies and the proteins... The risks of the vaccination exceed the benefits.

It is common sense that almost everyone who hasn't been vaccinated by now has damn good reasons and is proud about his or her decision. The manipulative ads display bullying on steroids. They suggest that, just like the Jews in Germany around 1940, the unvaccinated people are under such pressure that they can no longer tell the truth to their kids or close friends. Sorry, we will never be under this kind of a pressure (thank God, I am personally under no pressure at all), unlike the Jews, we have lots of firearms, and if you try to change something about this fact, your life won't be safe. It is you, pro-vaxx fanatics and Covid hysterics, who should better shut up and walk through the sewerage system if you think that you have the moral right to leave your basement.

But these stupid billboards and sketches were not enough so the outgoing government declared its desire to start a "brutal campaign". They asked hospitals for 100 photos of patients in their covidariums, picked about 12 photographs, and each of them was equipped with a comment like: "[This man] believed misinformation and that is where he ended" or "she was constantly postponing the vaccination" (he or she may already be near death or dead, as indicated by blue bags or hospital-style metallic coffins).

Some of the photographs are disgusting and most of the explicit bodies are as fat as you should expect by now. Clearly, if you really show the real situation, it will agree with the data obtained otherwise: Covid is only very dangerous for people who have several of the characteristics such as high age, high weight, extra comobordities from a list. It is completely deceitful to say that a skinny young athlete is in the same situation as the fat person above – and the athlete knows it! "We are all equal and it affects all of us", we often hear, except that we aren't and it doesn't. We were never equal and on top of that, Covid has been one of the most unequal diseases in the world history. 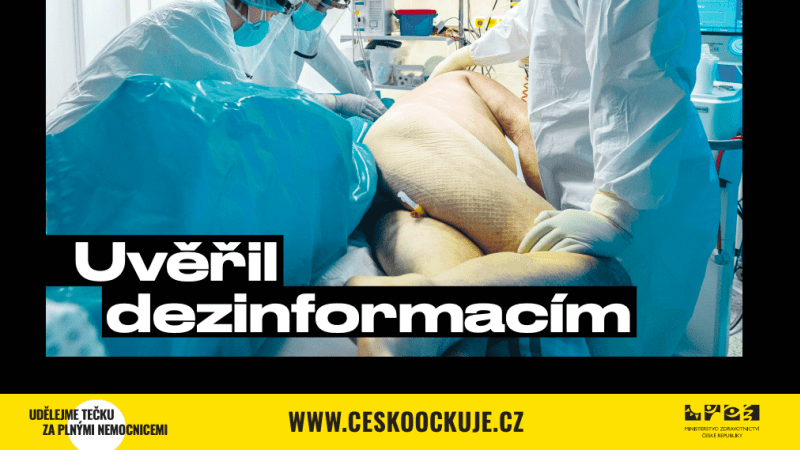 This most widespread picture with an unhealthy naked fat patient boldly claims that "he bought the misinformation". Is the cylinder near his ass a penis in a tube (e.g. to remove urine) or just a penis-resembling cable to pump something into the rectum? At any rate, this picture and others are not pretty and it is shameful that the ministry is showing this garbage to kids, too. There are lots of disgusting scenes in hospitals (and in morgues, those were popular among the fear porn assholes around Feb 2020), by construction, and it is simply right for healthy people not to look for pathologies. Some more examples have captions like he missed the third jab, she thought that she was in no hurry, he had lots of excuses, she was constantly postponing the vaccination, and some other comments that you could invent if your IQ is above 80 and if your task were "to create some simple dishonest Coronazi propaganda slogans". 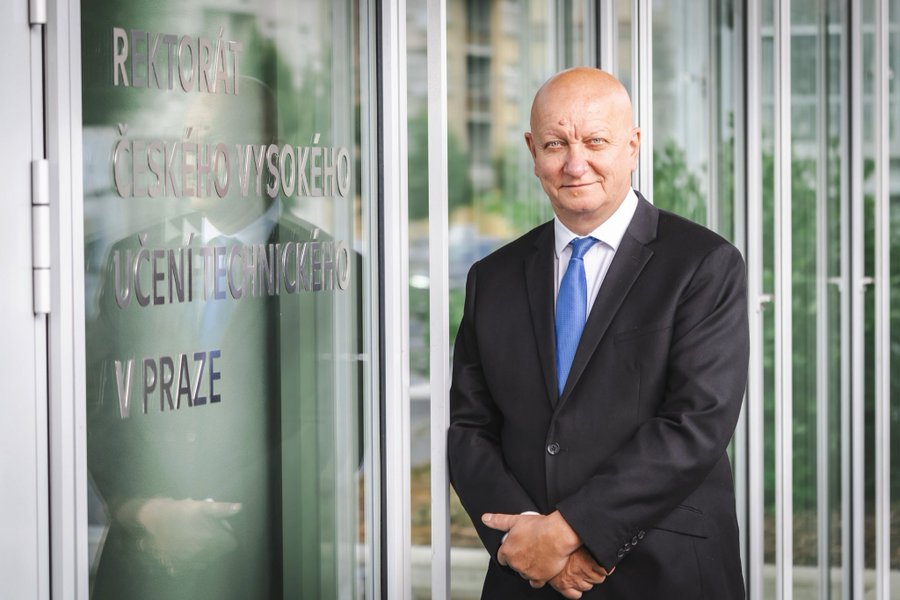 The president of the main Czech "MIT", ČVUT (Czech Technical University), Vojtěch Petráček (picture above) turned out to be a massively important new anti-Coronazi warrior and he sent a powerful letter to the minister of healthcare, Adam Vojtěch (the rector has Vojtěch=Adalbert as the first name, the minister as the surname). The rector says exactly what I would write (and what I did say and did write, at various places) – and other technically trained people who have something like the scientific integrity or something close. Well, I clearly understate my proximity to his background: he is a nuclear physicist and that counts! Of course a nuclear physicist is expected to solve similar new scientific issues more correctly than a damn physician.

The rector demands the "aggressive", "disgusting", and "unethical" campaign to be stopped immediately. First, he argues that people including kids (I said the same thing!) have empathy and these pictures will unvaoidably lead to very bad mood and maybe psychological disorders. This campaign will damage our society in a blanket way but it will not motivate almost anybody. The university boss asks whether the ministry has asked experts about a judgement on the psychological impact of the campaign at all.

Second, just like me, the rector is angry about the dishonesty of the texts added to the pictures:

Aside from the photographs themselves, the texts are outrageous, too: How can you know that those patients didn't have a very good reason to avoid vaccination? How can you connect your slogans that condemn the patient with his or her actual fate that is unknown to you? Minister, it is disgusting!

The rector also brings a positive alternative. He emphasizes that every scientifically literate person knows that the antibodies from the recovery from Covid are more powerful than the vaccination. So the measurements of antibodies could be subsidized or paid by the government. The intelligent Czechs know that the vaccination is useless after the recovery from robust enough Covid. In fact, many believe something stronger which is probably true, too: The interactions between the natural antibodies and the content of the vaccine may bring new, elevated dangers.

It is shameful that even the current minister Adam Vojtěch has basically fully switched to the dark side; my praise 6 months ago (built on his sane approach in Spring, Summer 2020) no longer applies. Because PM Babiš supported if not co-masterminded the "brutal campaign", at least his departure from politics (where he is being replaced with a coalition of 5 spineless parties licking the Brussels and Berlin rectums) will be easier for us, decent Czechs. (It will also be easier because of his pathetic attack on the process of raising the interest rates by the Czech National Bank. It is clearly the right thing for ČNB to do now and Babiš, having the highest debt among all Czech citizens, clearly finds himself in the most egregious conflict of interests, in this case literally "interests" in the financial sense, too LOL. Central banks should be and ČNB is an impartial independent government body that finds justice in between savers, borrowers, companies with and without debt etc. by targeting inflation i.e. by making sure that the real value of the currency is what the people on both sides have expected.)

77% of Czechs at the Novinky.cz poll say that the brutal campaign won't motivate people to get vaccinated. Note that around 90% of Germans who haven't been vaccinated (and over 50% of Americans) claim that they won't change their mind.