In the early 1990s, I polemicised the use of completely misleading adjectives that usually denied rather than developed the following noun. It was a well-known battle in Europe, which had its main meaning in the German-speaking world, over the so-called soziale Marktwirtschaft (social market economy). The society (not only the economy!) of Germany and Austria was based on it in the second half of the 20th century. And it was to be ours too. 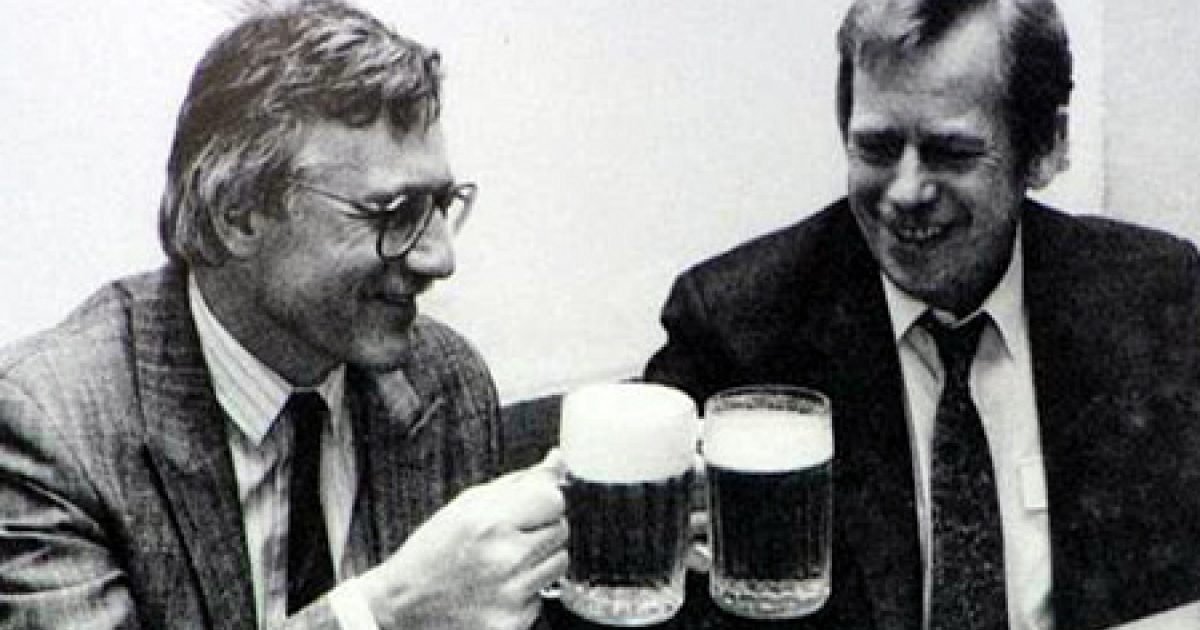 LM: I guess that my choice of this 1989 photo will raise Klaus' blood pressure (he was medically treated for that recently) but it's November 17th today. ;-)

But I and the people around me wanted to introduce a "market without adjectives" in our country. It goes without saying that society must also think socially (I did not deny this for a second, even though many did not and do not want to know), but I considered it necessary that the word "socially" should follow the word "market", not precede it.

The market must first function, only then can social elements be added to it. Rational social policy must be a complement, an addition to the market, not an a priori restriction or blockage of it. Perhaps I can rightly say that we won the argument about these things in our country in the early 1990s, and that this was a prerequisite for the success of our radical transformation. It was also then that the famous hyperbole that horses must be harnessed in front of the cart, not behind it, became 'famous'. It seemed to me that we had explained this to our public at this point, at least to the part of it that wanted to think.

It was, of course, difficult to explain it to socialists of all kinds (scattered in all political parties), because they – as communism exemplarily demonstrated – wanted mainly to own the wagon (as full as possible a wagon) and wanted to give out of it. In their naivety, short-sightedness – and I must accuse them of malice – they took quality horsepower for granted. As communism has shown, it was not a given. I insist that socialist thinking is inherently based on a misunderstanding of this trivial truth.

When it began to seem in the past decades to superficial observers of the advanced and rich capitalist economy that the social (and therefore actually economic) problem of humanity had been solved (at least in the society of the advanced West), that therefore the colour red was no longer so important, the Greens came up with their colour green. The adjective social was not enough for them, they needed to add – I repeat, in front of the carriage – the colour green and thus fundamentally damage the quality of the market, the quality of the economy. The social imperatives were no longer enough, mainly because they did not mobilise the "masses". Therefore, they began to be supplemented at first, but later significantly overtaken by green (or ecological, or environmental) imperatives.

The crown of this radical social shift was set by the transformation of environmentalist thinking from cleaning wells to fighting the climate. It is this event that has brought us to the present day, to the theatre of the absurd (or fair of crazy ideas) in Glasgow, Scotland, which may be the x-th gathering of its kind, but it is evident that the shift underway there is now reaching a new quality. The demand is no longer die soziale Marktwirtschaft, the demand is becoming die ökologisch-soziale (or perhaps ökosoziale) Marktwirtschaft. We know that one such adjective was already too much, but two adjectives at the same time are not enough for the market – and thus the prosperity of the contemporary Western world – to bear.

I remember that we discussed these problems even under communism. Albeit in slightly different terminology, but with pretty much the same beef. Those of us who resolutely rejected the communist system of economics did not ask to exclude the word social, we could not have gotten away with it, but we asked to ensure the maximum degree of autonomy of the economic system from politics. It was no accident that not long after November 1989 I understood that politics had ceased to take precedence over economics. For a time this was true. That was our great victory, but only for a short time.

Our defenders of the word "social" were apparently sidelined by the fall of communism and – crouched – remained silent. The defenders of the word "green" were already sticking their necks out, but they did not – until the victory of the global warming doctrine – have enough strength. The idea that central bank monetary policy could set social objectives was then beyond any discussion. There was a debate about whether the central bank should only look at inflation as its primary objective, or whether it should also look at the development of output, i.e. GDP, and thus employment. This is, to some extent, a legitimate debate. However, it would never have occurred to anyone at the time that the central bank should bring social aspects down from the macro to the micro level, i.e. from the central to the commercial banking level. What I am just recalling now was considered elementary textbook truths for freshmen at universities of economics.

I believe it would have remained so if the word "social" had not been reinforced by the word "green". Equally, I believe that it would have remained so if the word "green" had not shifted from cleaning not only wells, but also, for example, the river Bečva (which was recently poisoned), to the battle for the climate, for the average global temperature. If the belief in a direct proportionality (perhaps not just a linear, but rather an exponential relationship) between CO2 emissions and average global temperature had not prevailed in world politics (not science!). There is not the slightest doubt that this completely unscientific relationship is not held by serious science. Yet the entire tirade of the last few days and weeks in Glasgow is based on the existence of a hypothesis of the undisputed validity of this relationship.

I have been following closely the whole endless series of meetings of this kind. They have taken place several times at the UN General Assembly in New York, and I have spoken at them. For a long time it was of a different character from today. They talked mainly about reducing CO2 emissions through structural changes in the economy, through the elimination of heavy industry, through the extraction and use of fossil fuels, through the reduction of motoring, etc., and they recommended that governments make these structural changes. This was applauded at such meetings by politicians, the new central planners. Therefore, the methods of how to make these structural changes (without changing the nature of the economic system) were not discussed; the new-age central planners seemed to be able to do it directly. By directives on the one hand, taxes and fees of various kinds on the other. Mostly by emission allowances, which even some economists (but that word should be put in quotes) considered to be a market-conforming solution.

Nobody thought of directly tasking the banking (and financial) system. Ideological science had to help, a new monetary doctrine had to emerge, which quite appropriately came to be called new monetary theory. Where else could this have happened but in the bastion of progressivism, the USA, although the European Union did not waver. A few years ago it was also discussed at the annual August meeting of bankers, economists and politicians at the magical Jackson Hole in the Teton Range in far western Wyoming, which I also attended several times. It was always there that monetary policy, or the basic contours of monetary policy for the future, were determined.

The Trump-appointed (!) head of the Fed, Jerome Powell, implicitly subscribed to the new monetary theory there, in full view of the entire professional world, by saying that central banking must also take into account the social and environmental aspects of its macroeconomic policy, and that the social and environmental aspects must be taken into account today and every day by commercial and investment banks in their micro-policies. The US Federal Reserve has even joined the "Network for Greening the Financial System", which is an international group looking at how to build climate thinking into banking.

When I first read these views, repeatedly critically analysed in, for example, the CATO Journal, I couldn't believe my eyes. But it didn't take long for it to become part of mainstream thinking. In the serious British journal Economic Affairs, I recently read a review of one of the "bibles" of the new monetary theory (Stephanie Kelton, The Deficit Myth: Modern Monetary Theory and the Birth of People's Economy, John Murray Press, 2020) and I could not understand why the reviewer did not dare to say why it was all nonsense. The lofty mathematical equations may impregnate it with mystery, not substance.

So let's not try to greenwash monetary policy. It is bad enough that various commercial banks do so in their TV commercials. Will their clients want the bank they have entrusted their money to abandon pure economic thinking and address global temperature? After all, the term green banking has been around for a long time, but it used to mean Islamic banking, which is not what we are concerned with now.