Novelties of the non-existent Fall 2021 Covid wave in Europe

The Euromomo charts of the total deaths speaking a clear language.

In Fall 2021, there is clearly absolutely no statistically significant excess of deaths in Europe which is why it's possible for the end of the graph to show the below-the-normal deaths although the latest weeks may be updated soon (yellow). For some 20+ weeks, Czechia has exhibited below-the-normal total deaths in almost all the weeks (and tiny excesses in 2 exceptions), too.

You should look at individual Western European countries like France where it is totally indisputable that the number of Covid deaths has plummeted to near-zero levels. The real problem is that arbitrarily tiny, homeopathic levels of Covid problems in the societies seem to be enough for the evil guys to brainwash something like a slight majority of the population and persuade them that they need to support draconian nationwide restrictions, anyway. Covid is not the problem of the nations (although some particular people may still sadly die); Covidism is.

In Czechia, the elevated Covid dying between October 2020 and April 2021 was impossible to deny. In numerous peak weeks, the total number of deaths was twice the normal figure. And this very excess surely implies that the overwhelming majority of deaths with Covid were deaths due to Covid, too. In fact, it is plausible that some deaths due to Covid were overlooked (excess deaths trumped the deaths-with-Covid in 2021 but that inequality was switching in 2021). On the other hand, there were some deaths due to the hysteria and Covid restrictions (suicide, banned surgeries and other neglected medical help etc.). I have doubts that the percentage was substantial but these deaths were really upsetting because they were basically caused by the governments and particular culprits while Covid-19 deaths became "natural" at the very moment when Anthony Fauci released the virus from his Chinese lab. Deaths from the vaccine also exist. So far, I believe that they're 2 orders of magnitude below the deaths due to Covid.

But the situation is completely different now and at most roughly 50% of "deaths with Covid" are "deaths due TO COVID" e.g. in Czechia. This statement is not far from being a consequence of the official numbers. The real issue is that the deaths/cases ratio has incredibly plummeted and the implied case fatality rate is well below the flu's now. Just look at the numbers. On Tuesday, Czechia saw the massively record-breaking 22,511 positive tests (over 2,000 per million people in a day, I think that no other country has ever had it). But the number of deaths was just 54 on that day which will be updated to something like 60. The naive case-to-deaths ratio is already 400-to-1 and it is almost certain that the actual ratio is well above 1000-1 because much many fewer than 1/3 of the people capable of a positive PCR test actually get one.

In fact, the virus positivity is incredibly widespread now. On Wednesday (a holiday, the anniversary of the 1939 and 1989 student events, the latter started the Velvet Revolution; and I went to Prague for an anti-Coronazi rally yesterday, 10,000 people attended) saw impressive percentages of positive tests. 47%, 19%, 10% of the diagnostic, tracing, and preventive tests were positive! The percentage 10% really means that 10% of the people with other illnesses and serious risks accidentally are PCR-positive on the day, too. This means that 10% of their hospitalization and 10% of their deaths will be spuriously attributed to Covid (counted as "with Covid") although the causes are different. In particular, 10% of the normal non-Covid days i.e. 30, exactly 1/2 of the total deaths-with-Covid around 60 that I mentioned, will be misattributed to Covid.

It means that the actual deaths due to Covid were some 30 on Tuesday; and the number of PCR-positive tests from that day was over 22,000. The ratio is almost 1,000 by now. But 22,511 is actually a huge underestimate of the number of positive PCR tests that we would get if everyone were tested every day. Indeed, some 10% of the population (a million Czechs) may be PCR-positive and that number could be divided to (the average figure) 10-14 days of the positive period to get some 70,000-100,000 cases per day. With 100,000 total cases a day and 30 deaths due to Covid, the risk of death ends up being 1/3,000, and that is a fraction that I have believed to be right for Fall 2021 for quite some time. Covid is less dangerous than flu by now.

Before that, the risk of death was something like 0.4% or 1-in-250, and 0.3% of Czechs died from the exposition of some 75% of the population to Covid for the first time. The dramatic decrease to 1-in-3,000 is due to better treatments and drugs (including the monoclonal antibodies), the fact that many PCR-positive people already have some immunity (from previous recovery, which is more important, and from the imperfect vaccines), and due to the generally less dangerous character of the mutated disease.

On the other hand, I was surprised, and many competent epidemiologists were equally surprised, that Covid-19 was capable of this dramatic 2021 growth of cases again. Well, there are the following reasons: So these three main causes make it possible for Covid-19 to quickly increase even in a population where a much higher fraction of the people have an immunity. However, all these explanations indirectly imply that it has become much less dangerous to be PCR-positive now. I find it obvious that by now, thanks to the calculation above and similar complementary ones, the average PCR-positive person is not more threatened than the average person with an average respiratory disease, and by the average respiratory disease, I increasingly mean a common cold, not flu. The information hiding in someone's positive PCR test is nearly zero by now. It doesn't mean that you will have any serious disease, you almost certainly won't (especially if you know that you are not a member of a group at risk). On the other hand, your positive PCR test isn't something rare that has far-reaching consequences for public health, either. As many as 10% of Czechs could be getting a positive PCR test now, as our "preventive" ensemble indicates. So some PCR-positiveness is virtually everywhere. The following statement is more true than ever: the only important role of the PCR tests is to preserve the hysteria and policies that are beneficial for a small class of evil people. 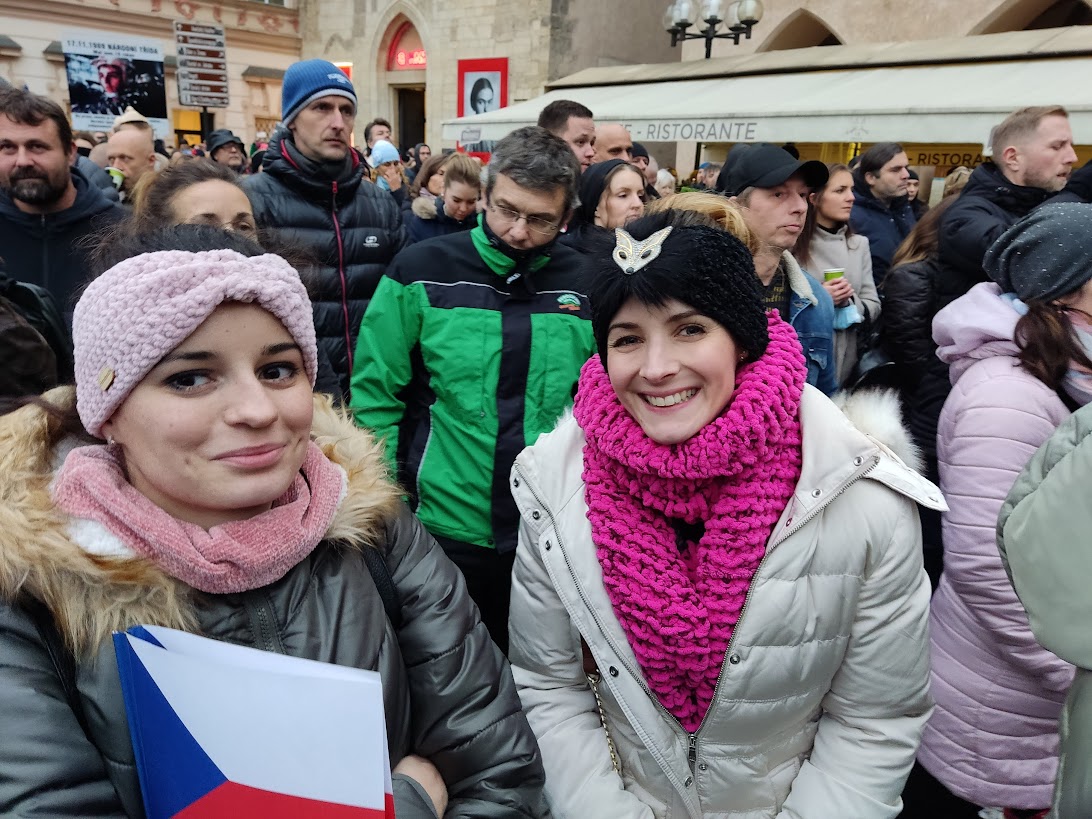 Typical extremist skinheads from the anti-Coronazi rally at the Old Town Square (we also marched through Prague). There were no serious tensions with the police. Police sometimes interrupted the speakers and yelled about distancing and respirators, we kindly ignored it. Both the propagandist media and we agreed that the number of participants was of order 10,000: the Old Town Square is 9,000 squared meters and effectively 1/2 of it was filled with the comfortable-concert-density of 2.5/m2. The cops realized that they could have easily been trumped by our force if they tried to fight so they didn't. The speeches were cool, some were fiery, some were milder, ordinary people, restaurant owners, bosses of political parties, doctors, lawyers, and musicians spoke and sang.

Despite the non-existence of the problem, Austria became the first country to ban unvaccinated people from the social life. Shockingly enough, on our Holiday of Freedom, November 17th, the Czech government announced a similar policy from next Monday. Italy will probably join, some parts of Germany did, and Germany as a whole may join, too. This hardcore fascism is spreading like fire. It seems that those who organize it don't understand (or completely deny) that they may end up in the same way as their predecessors, the masterminds of the Holocaust.

As I have argued, it is completely nonsensical to expect a slowdown of the contagion from these policies because the main "policy-related" reason why the virus is growing (but can't be growing for too long) is simply the fact that the vaccinated people (a majority) are not required to have negative tests anywhere even though they are equally likely to be positive and spread the disease like the unvaccinated minority. So the official explanations of these fascist policies are pure lies.

On the other hand, I think that there exists a valid justification of these policies (which we unfortunately don't hear at all). It is clear that the virus keeps on spreading and most European countries have either peaked in this 2021-2022 wave, the last one worth a tiny attention, or they will do so soon, thanks to the temporary approximate herd immunity adjusted to the currently relevant parameters. And it is simply better to reach the approximate herd immunity with the vaccinated people because they have a somewhat lower risk of a serious course of the disease or death. Most of them no longer seem to be protected against the infection and a majority of the vaccinated have to be infected with Covid, too. But it's unavoidable that a temporary herd immunity is reached and many of the more threatened people, especially the unvaccinated seniors, may avoid the exposure to Covid-19 forever.

The nonzero reinfection rate makes it very likely that the strict notion of herd immunity that will drive the Covid-19 descendants into extinction is impossible. Because many (dozens of percent of) people can get the disease every year or twice a year, although in a mild form, and the \(R_0\) of the disease is around 10, the rate of PCR-positivity will be prevented from dropping strictly to zero. From the beginning, many of us have talked about the major scenario for the future: Covid-19 will become another class of common cold virus that will be with us, causing similar diseases as other similar viruses. I think this scenario has become much more likely than the complete extinction of Covid-19 related viruses. Of course, it is still possible that the virus will be driven into extinction because e.g. 3 infections will be enough for everyone and the virus will have a limited landscape of RNA codes to mutate into.