Unitarity conditions for the (de Sitter) wave function of the Universe?

Laws of Logic Lead to New Restrictions on the Big Bang

It starts with a nice self-similar hypnotizing animation by Dave Whyte (who is not racist, just racyst) whose value will exceed the value of the text according to many viewers (not readers). 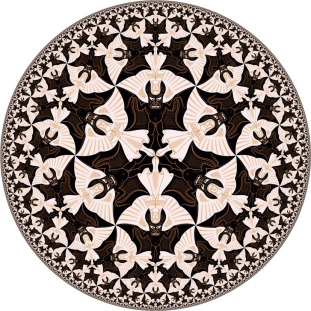 Escher's picture of the hyperbolic space was used as a plan to spread the bats' and Fauci's Sino-American Covid-19 virus among an exponentially growing number of bats and people.

OK, Wood starts by popularizing some basics about the hyperbolic spaces, de Sitter space, and unitarity. Similar popular articles seem to be written for many different groups of readers. Each of them may find something appropriate, like cartoons that are sometimes more exciting for the adults than their kids. But I am afraid that the people who need to be explained what unitarity is won't really appreciate the new scientific results.

Great. I guess that most of the real "new science for experts" is about the unitarity conditions that may apply to the "wave function of the Universe". In "qualitatively static spacetimes", we often study the S-matrix, the unitary evolution from the infinite past to the infinite future.

Because the total probability of all outcomes is preserved for every initial state, we have\[ S\cdot S^\dagger = 1. \] The S-matrix is unitary, like all standard evolution or transformation matrices. This simple unitarity condition may be reinterpreted as a collection of infinitely many theorems for particular scattering amplitudes of many kinds. Various versions of the unitarity are still called the optical theorem which was the first "very specific" identity (morally following from \(SS^\dagger =1 \)) which was derived by Werner Heisenberg.

That was originally "non-relativistic quantum mechanics" but you should look what the optical theorem looks like in terms of Feynman diagrams. Like both sides of the \(SS^\dagger=1\) equation, the sides are "real" by construction, either the real part of something or the product of something and its complex conjugate.

I think that Wood primarily promotes articles starting with the 2020 text by Goodhew, Jazayeri, and Pajer

which has semi-respectable two dozens of followups by now (such as this Di Pietro et al. from August 2021). For the diagramatic and \(\rm\LaTeX\) form of the optical theorems they propose for the wave function of the Universe, look at pages 15 and 19, among others (16 and 20 out of 58). Again, the equations are "real by construction" but we only qualitatively deal with "one moment", not a scattering process that relates two moments, "the past and the future". Four-point exchange diagrams are claimed to exhibit powerful constraints on the bispectrum and the trispectrum.

Without having any clear counterpart of \(SS^\dagger=1\), they claim to derive or "derive" all these constraints from some polology (poles in the complex plane and their residues) that are completely analogous to those in the flat space with the S-matrix. I don't understand whether this generalization of the flat-space polology depends on some extra unproven hypothesis or whether they claim their derivations to be "complete proofs". Pretty much equivalently, I would like to be clearly explained whether their "unitarity directly constraining de Sitter correlators" is something that remains important and precise near the very beginning of the Universe, or is just some "deformation of the flat space rules" that should only be relied upon when the space locally looks like the flat space qualitatively. In the latter case, I would say that the constraints don't really tell us much about the initial state of the newborn Universe.