With no excess of deaths for 18 weeks, Austria joins the hardcore Coronazi club

Hundreds of millions of people in the West have been totally and hopelessly brainwashed by the Covid propaganda and they seem unable to see even the most basic facts. Such as the fact that Western Europe has basically no medical problem with Covid-19 right now.

Austria has a new chancellor after Sebastian Kurz was removed (I believe it was a coup, the culprits are Soros-affiliated, and all of them deserve death). It just happened that soon after this removal, Austria has banned the entry of the unvaccinated people to restaurants, hotels, events with 25+ people, ski slopes, and more. 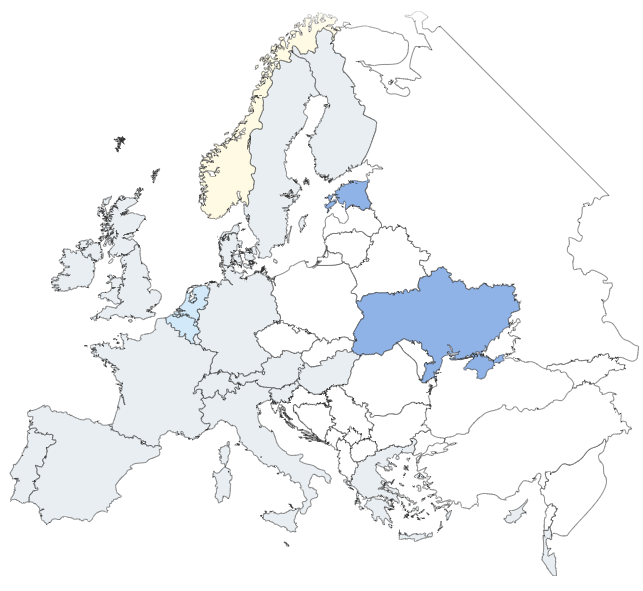 Is there a possible justification for these extraordinary measures? To see that the answer is a resounding No, just check the Graphs and Maps section of the Euromomo website dedicated to the excess (total) deaths in Europe. In the middle of the graphs-and-maps page, you may see the map. There is a slider that allows you to return to previous weeks.

The screenshot above is from the latest week 43 which means October 25-31. What do you see? A part of Europe, mainly Central and Eastern Europe, is "white" which means that no data arrive from those countries (Czechia had a deficit of deaths in each of the weeks 21-36, followed by tiny excesses in weeks 37-38). Most of the Western Europe is "light grey" which means no excess (at most up to a 2-sigma excess, the number of sigmas is the z-score). And there are some blue countries, the more blue, the greater excess of deaths.

So in the last week of October 2021, there was no excess of deaths (meaning no statistically significant one, at 2 sigma or higher) in the following countries and lands:

The excess is only shown in Ukraine and Estonia (moderate); and Belgium and Netherlands (low excess). The week 43 may be updated later but week 42 (which is shown by default) and the previous weeks are pretty much final. In week 42, you see, relatively to the week 43 above, a low excess in Scotland, Germany, and Italy. Estonia drops to low, too. Ukraine is shown as "extraordinary high excess" there which is the only country that deserves to be said to have gone through a Covid epidemic. The deaths there were comparable to 20 per million people in a day, something that we knew during the peak Covid dying in Czechia, too.

But in Western Europe, there simply isn't any substantial dying from Covid-19 any longer and the death counts are mostly "no excess" with some occasional "low excess" and a very rare "moderate excess". You may also see that the excursions into "moderate excess" last for 1-3 weeks (e.g. France had a moderate excess in weeks 33 and 36, with 34-35 in between being "low"). They just can't be something that could justifiably change the conditions in a country for months.

If you look at Austria which just introduced the draconian measures, you will see that there was "no excess" in any of the weeks in the period starting in the week 6 through week 43, except for weeks 13 and weeks 25 (low excess in both). 36 out of 38 latest weeks saw "no excess of deaths" and the remaining 2 deviations were minimal. This is a truly extreme example of a country where the problems with Covid are completely fabricated. Like Germany, Austria previously declared its wish to ignore the "number of cases" which indeed mean almost nothing – especially because almost all of the recent positive tests measure the presence of a cold virus of a sort. These positive tests also lead to a significant fraction of hospitalizations and deaths with Covid which are not actually due to Covid! In Central and Western Europe, most of the hospitalizations and deaths with Covid are due to something else right now because the actual "Covid disease" is extremely mild now and robust majorities already enjoy some immunity.

None of these things seems to matter. And I haven't even discussed the fact that the vaccinated people spread the virus almost as intensely as the unvaccinated ones (especially because they're rarely tested) so the justifications for restrictions of the unvaccinated wouldn't exist even if Covid were a nationwide medical problem in Austria now. In Austria and many similar countries, the dark forces managed to totally deceive the bulk of the population and they can get away with similar outrageous unconstitutional policies. A few thousand of ill-defined positive tests for a common cold virus are enough to do the job. It seems very likely that in such nations, if the current nearly Covid-problem-free conditions are enough for these draconian restrictions, such restrictions will be sustainable for another year or years to come because this kind of a condition – like thousands of positive tests somewhere – are likely to continue for a while.

The far left (plus physicians' Labor Union plus Big Pharma) deceitful establishments started their "war on Covid" whose very purpose is to be as long and as deep as possible, instead of the other way around. Meanwhile, sensible nations such as Scandinavia (plus somewhat surprisingly, the U.K.) may continue their lives. The Swedish graphs show about 2 bumps, each of them was 7-week-wide (measured in the middle of the height) and brought 7,500 deaths (0.075% of Sweden's population), and that's it. There are 3-out-of-300 deaths a day "with Covid" now and that is clearly a negligible fraction. But if a nation "fights Covid" by trying to delay some of these numbers, it will partly succeed. The delay means that these narrow bumps may be spread over years and the nasty assholes may enjoy years (or decades?) of a fascist-style control over millions of people. Most of the "problem" that lasts for 20+ months is clearly socially engineered.

It seems very clear to me that the degenerated people who are willing to accept these conditions as an excuse for fascism will buy any other excuse for fascism as well. Of course a 0.01 °C temperature change in a year will be enough for them to ban regular cars or any insanity of this sort. These people have completely lost it. They have no common sense, no survival instinct, let alone economic thinking left. They are parts of a tumor that have completely outsourced their thinking to the center of the tumor where they belong. We will need a very, very brutal chemotherapy.